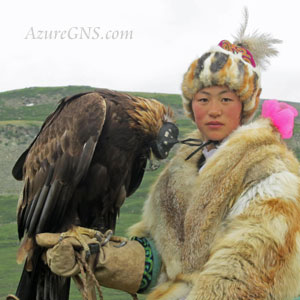 “So, what do you like to do in your free time?” I ask the young girl as we drink tea in her family’s ger, the round felt tent of the Kazakh nomad in Mongolia’s Altai mountains.
“Well, in winter,” she tells me through an interpreter, “I like to ride my horse into the mountains and hunt wolves with my eagle.” “Oh…right…”

Aigerum Askir is just thirteen years old. She lives with her parents, two sisters and a brother in the district of Altay. The closest real town, Bayan Ulgii, is a five-hour drive away over bone-shaking roads. She is a citizen of Mongolia though she belongs to the Kazakh ethnic minority, numbering about 40,000 people. They are followers of a moderate form of Islam, sheep herders, outstanding horsemen who eke out a living in the Altai, some of the world’s most remote mountains. 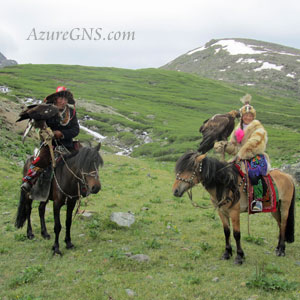 Hunting with golden eagles is a tradition stretching back into the distant past of Aigerum’s ancestry. The custom has been handed down from father to son, and now from father to daughter, for hundreds of generations. In the regions of Central Asia, it is only the Kazakhs of Mongolia who have kept the practice alive. Other tribes let the old ways slip away as they were forced, in many places, to settle and adopt new ways of life. But here a solitary rider mounted on a small but sturdy horse, clad in furs, can still be seen riding onto the high ridges, scanning the snow filled valleys below for game, with a full-grown eagle perched on his, or her, arm.

Aigerum has been learning how to handle her eagle, named Karan, since she was eight. Her father and uncle, accomplished hunters themselves, have patiently taught her how to train, care for and hunt as their own father taught them. 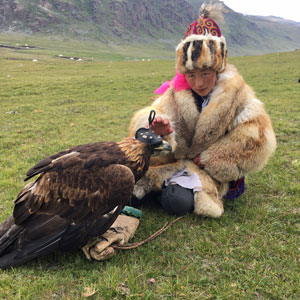 The eagles used for hunting are always female as they are larger than the males and more aggressive. Fully grown eagles can be caught in the wild, tempted with food and trapped in nets, though more commonly chicks are taken from nests. This is a dangerous job; would-be hunters must climb the most inaccessible peaks or be lowered down cliff faces to reach the nests, all the while risking attack by the chicks defensive and enraged parents. 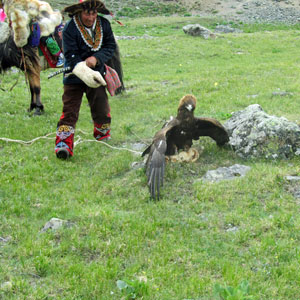 Once an eagle is caught, it is made an honored member of the family, given a place to roost inside the ger and fed nearly a kilo of mutton each day. The amount of meat required to feed an adult eagle is a strain on the nomads who mainly survive at a subsistence level; this and the time that must be invested in training make becoming an eagle hunter a weighty commitment and not one taken on lightly, even by an adult man, let alone a teenage girl.

Surprisingly perhaps, training an eagle to hunt only takes about three months. The birds are slowly accustomed to flying to their masters or attacking decoy animals made from fox skins by the reward of fresh meat. 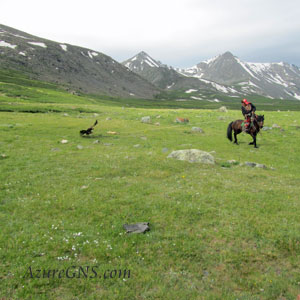 Winter is the time of the hunt. Before first light, Aigerum and her father will be up preparing their horses. After a breakfast of milky tea, bread and dried curds, they will wrap themselves in fur coats, hats and pants and ride into the mountains to greet the sunrise in temperatures of minus 30 degrees Celsius. The eagles are used to hunt marmots, foxes and the bravest will attack wolves. They operate by chasing prey into the open, where it can be shot by their masters, or attacking the animal directly. Wolves are grabbed by the snout and held until the hunters arrive to dispatch the animal.

Once the sole domain of men, eagle hunting has become a sport for women as well. In Mongolia Aigerum knows of about ten other girls who are hunters though there are only two others in the region she lives. Aigerum has competed in eagle hunting festivals, both locally in her area and also in Mongolia’s capital city of Ulaan Baatar. Next year she hopes to compete in a new festival held in Kazakhstan. Hunters are judged on three categories: costume and appearance of the hunters, horses and birds, the bond between the hunter and the eagle demonstrated by how quickly the bird will fly to its master from a distant perch, and hunting ability shown by how well the eagle can catch a decoy fox skin dragged, at speed, behind a galloping horse. 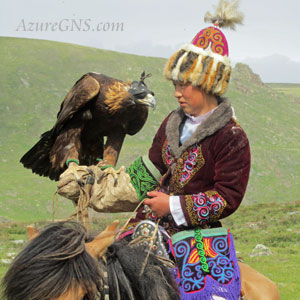 Outside the ger, Aigerum puts on a fox fur coat and climbs into the saddle of her horse. Her father hands her a thick leather glove to protect her from the bird’s razor like talons and coaxes the hooded eagle onto her arm. Using a forked stick to support her arm under the weight of the adult eagle, the young girl turns her horse and races off up the mountainside above her family’s camp. In the valley her father takes a tattered fox skin on a long string and begins to run dragging the decoy behind him. Aigerum removes the hood, needed to keep the eagle calm until it’s ready to fly, from Karan’s head. Karan shrieks a high scream, spreads her wings and launches herself into the wind. Instantly her vision is attracted by the movement of the decoy and she swoops down from the mountain homing in on her prey. The long dead fox has no chance of escape once again as the eagle hits a perfect bulls-eye, latches onto the skin and holds her wings over her prize as if to shield it. Aigerum gallops down to her eagle, leaps from the saddle as the bird proudly cries out, waiting for her reward of shreds of fresh meat. The young lady coos to her eagle and strokes its feathers in praise. 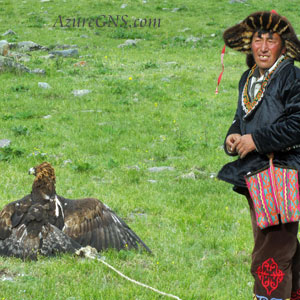 Later, as we drink more tea, Karan watches us from her roost. Aigerum’s father tells me that before the great bird is too old it will be released back into the wild to live in a natural state, flying silently over the peaks and valleys in search of prey of its own. The bird squeals and Aigerum says something; Karan cocks her head as if listening and then remains silent. 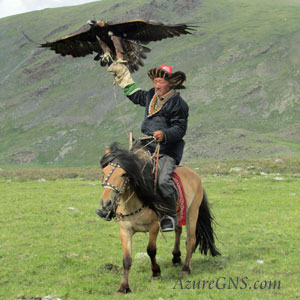