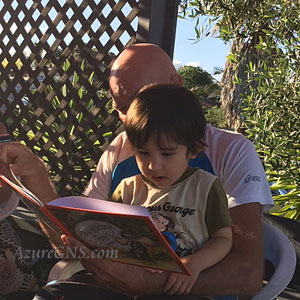 My son, Bodhi, is a mixed-race four-year-old child. I’m from New Zealand, my first language is English, and my son’s mum is Japanese. When he first began to speak, I was worried about what language he was going to use; my Japanese is very limited and as I was pretty much the only English speaker he knew, I wondered if he was likely to develop language skills only in Japanese, “Will I be able to communicate with my son?”

Naturally, as he grew up in a Japanese environment and went to a local Japanese nursery school and then kindergarten, Bodhi’s first language became Japanese. He is exposed to Japanese language situations far more than he is to English situations. His Japanese is much better than his English; he can make more complete sentences, use prepositions and particles correctly and use more abstract concepts like “dakara” and “demo” However, he is able to communicate most of what he wants to say to me in English, sometimes in more broken English, but he is still effective.

My lack of Japanese language skills has actually turned out to be an advantage in helping Bodhi to be bilingual. I tried to get my wife to speak English to him at home so that our home environment would also be an English environment. Her English is very good but at the end of a long day at work, when the dinner needs to be prepared, Bodhi given a bath and put to bed, it is just easier for her to slip into her own language of Japanese. If I were more proficient in Japanese, it’s likely I would also use that with him since there is more of a chance, he will understand me. But as I said, my Japanese isn’t very good, so it’s English we use. And as a result, Bodhi has picked up more of this language.

It has been interesting to see how well Bodhi has adapted to growing up exposed to two languages. Very early he seemed to recognize that the way Mummy talks is different from the way Daddy talks. He will say something to his mother in Japanese “Cookie wo kudasai!” and then turn around and say the exact same thing to me in English; “Daddy, cookie please!” Once when I was picking him up from his kindergarten in the summer, one of his little friends was complaining about the heat; “Metcha atsui!”. Bodhi turned to me and said, “He’s too hot!”. He translated his friend’s comment. 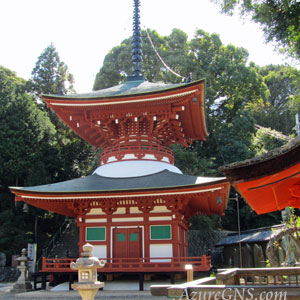 Bodhi’s use of language also gave me insights into the way he views the world around him. A year ago, we visited Koya-san in Wakayama and stayed in a small guest house for international travelers. In the evening several foreign tourists sat around in the hostel lounge relaxing and Bodhi, enjoying the attention he was getting, tried to talk to them. However, he spoke to them in Japanese which they couldn’t understand, it seemed he thought I was the only one who spoke English and that everyone else in the world spoke Japanese. In fact, one day when I did speak to one of his teachers in Japanese, he was surprised: “Why did Daddy speak Japanese?” 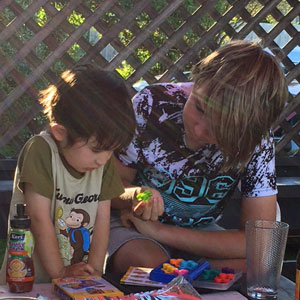 I have made it a point of never actually “teaching” him any English. I have never made him sit down and recite the alphabet, nor have I ever done something like make him repeat the names of his animal toys in English. I’m sure that if I do this kind of thing he will soon see English as a boring task to be done and resist it. Instead I try to get him to use English as we play and talk.
“Daddy look! Wan-chan!”
“Oh, yes! What’s wan-chan in English?”
“Doggy!”
“Good boy!”
Later, I might check to see if he’s remembered: “What’s wan-chan in English Bodhi?” But if he doesn’t want to answer or gives me a silly answer instead, I just let it go. This seems to have worked as he has recently become curious about English and will ask me;
“Daddy, how to say __________ in English?” 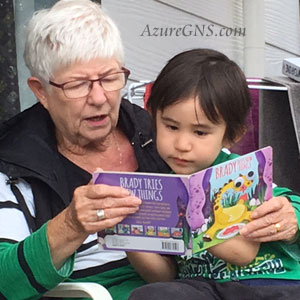 A while ago Bodhi and I visited New Zealand for a three-week vacation. Due to her work Bodhi’s mum couldn’t join us so he was surrounded by only English the whole time. Once again, like at Koya-san, Bodhi didn’t realize that other people spoke English and couldn’t speak Japanese. For the first three or four days he kept trying to speak to my family, none of whom could understand a word of Japanese, in his first language of Japanese. After a few days of getting only replies of; “What?” or “Mmmmm.” he seemed to click onto the fact that no one understood him and that he needed to use English.

After that his English improved rapidly. Even in three weeks he was using new and more complex vocabulary and fuller sentences: “Lovely day, isn’t it?” or “Pretty hot today, isn’t it?” and “Don’t forget that Daddy!” During the time in New Zealand Bodhi’s fluency also improved, his English rhythm and intonation became more expressive and natural as he mimicked the people around him. He did still use Japanese mixed in with his English, he would use the particles “wa” and “ni” and didn’t pick up the English word “because” and still used “dakara” or demo “sa”. And at times he was still confused about who spoke English and who didn’t; in a shop I asked the assistant a question and when we left the store Bodhi asked me; “Daddy, why that lady speaking English?” 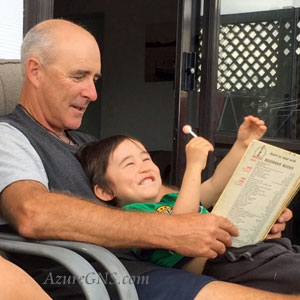 Japanese parents have asked me about my son’s bilingualism and how they can replicate it with their own children. Unfortunately, I feel it needs to be a natural process. If a native Japanese speaking parent tries to speak English to their child the effect seems to be limited, it’s just not natural and the child senses this. Of course, this doesn’t mean Japanese parents can’t teach their children English, it just needs to be done as part of play and without expectations of accuracy.

So, my fears of three years ago were never realized. Bodhi is comfortable in both languages; in fact when we returned from our vacation in New Zealand, he seemed a little nervous that he would have to speak Japanese again. In the future I expect him to continue to improve in both English and Japanese though I do wonder if, when he becomes a teenager and seeks his own identity, he will want to speak one language rather than the other. I guess that might depend on where we are living at the time. 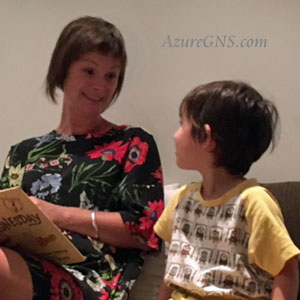